Speed is of the essence when electrical safety is concerned

That’s why at Techna, safety, functionality and reliability are the most important aspects of our service provision (and across all our electrical product range).

So do you know your RCCBs and MCBs from your RCBOs?

At Techna we specialise in providing premium quality and functioning electrical products for circuit protection, to protect both you and your equipment.

We have a range of data sheets and CAD models available that you can download directly for further information on any of our products.

The business of providing safety and peace of mind when dealing with electrical circuits relies on finding the right product for the required application.

A mistake can be costly so we aim to make it simple to understand our product range and have listed some of the most common questions we receive, from individuals through to businesses.

What does RCD stand for?

RCD stands for Residual Current Device, this is a top level generic term for a variety of residual current protection products. A residual current is a (usually) small amount of current leaking from a live conductor. In most cases the ‘leak’ is to earth (ground in the USA). You therefore often find residual currents referred to as earth leaks or ground faults. However, in multi-phase systems it is also possible for residual currents to leak directly between live phases.


What is an RCD (Residual Current device)? 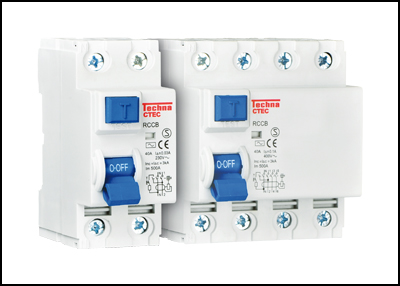 RCD Circuit Breakers are designed to automatically disconnect an electrical circuit as soon as an imbalance is detected between the supply and return conductors of that circuit. On a single-phase system this would be between live and neutral where the current is leaking to earth, however as mentioned above, on three phase systems (delta or star configured) the RCCB would monitor all the live conductors and also the neutral if present.

RCDs usually include a self-test feature and can be reset once the fault condition has been repaired.


What does a Residual Current Device (RCD) do?

A Residual Current Device (RCD) is designed to quickly disconnect the electrical supply in a circuit, should you accidently break the circuit. This can occur through a DIY accident when drilling into walls and cutting into an electric cable or cutting through the cable with a lawn mower, water ingress into an electrical circuit or more generally when insulation on old wiring becomes damaged or degraded.

The Residual Current Device will detect this fault flow and immediately disconnect the circuit supply to prevent harm from electrocution, an ongoing electric shock or even an outbreak of an electrical fire.


How does an RCD/Residual Current Circuit Breaker (RCCB) work?

The measurement should be zero when the circuit is operating in normal conditions (what goes in must come out) meaning there is no leakage.

If there is a difference between the balance of the supply conductor(s) and the return conductor in an electrical circuit this indicates that there is a leakage of current somewhere.

This could be extremely dangerous and presents a shock hazard to the person operating the device. A safety mechanism must therefore be in place to detect any leakage and if detected, cut the electrical circuit immediately.


How much leakage in an electrical circuit is potentially dangerous?

Any leakage is potentially dangerous. An electrical current of around 30mA (0.030 amperes) passing through the human body is enough to trigger a cardiac arrest, or other injury, even if it only lasts for a fraction of a second.

Any shock can cause injury directly, or indirectly through incurring a fall at the same time, so safety measures must be in place to cut the circuit when required to prevent potential hazards.


How can an electrical circuit ‘leak’?

Examples of things that could cause leakage and RCCB tripping are faulty equipment, or cutting the electrical supply cable on a lawn mower when moving the lawn, small animals chewing through cables, water leakage etc.

The interchangeable names used below are RCD or RCCB.

Should a leakage occur in an electrical circuit the RCD devices are designed to ‘trip’ the circuit fast enough to prevent an incident that could cause injury. Too late could be fatal.


Should a residual current device be on or off?

It is recommended to have at least two Residual Current Circuit Breakers in a household or business. Each RCCB protects a separate bank of MCBs. This is to ensure that if a device detects a fault and shuts down, the circuits protected by the second RCCB remain on. If the building is wired correctly this would ensure e.g. half of the lighting circuits remain on such that the building is not plunged into darkness (which would present a hazard in itself). Some installations where residual current protection is required for each individual circuit use RCBOs instead of RCCBs (this is explained later).

In operation the device should be on and ready to detect a problem.

When the RCD detects a current imbalance and trips the electrical circuit it will usually remain switched off until manually reset. It will only be possible to turn the device back on after the fault condition has been removed. The solution for reset is to turn all connected appliances off, reset the switch to the on position and then turn devices on one by one to see if an appliance is causing the fault. You may be able to speed this process up (depending upon the exact type of fault condition present) by first turning off all the MCBs being protected by the tripped RCCB. Reset the RCCB and then turn on each MCB to identify the individual circuit that has a fault. Once this circuit has been identified check all the appliances on that circuit in turn.

Usually in the UK and Europe switches pointing up are on and ready to function, but trip into the down position (off) when there is a problem. Devices should have markings on the front to confirm which is the on and off position.


What does RCBO stand for?

An RCBO is a Residual Current Circuit Breaker (RCCB) with Over-Current Protection.


What is an RCBO? 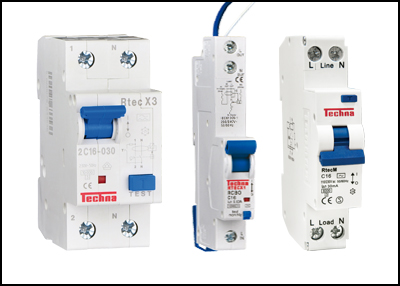 An RCBO is also referred to as an RCB device with overcurrent protection.

The RCBO combines the function of a RCCB and MCB in a single device.

Over-Current protection is required should a circuit overload or short circuit occur.


What does an RCBO do?

An RCBO, Residual Circuit Device with overcurrent protection, combines the functionality of an RCCB and MCB in one and therefore protects against two different type of faults: 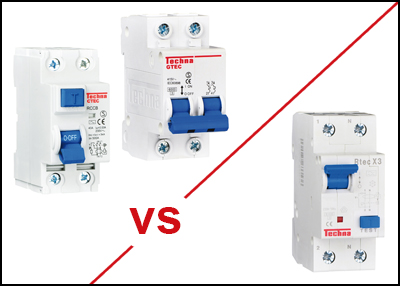 The RCD has one function, and the RCBO has two.

The RCD provides protection for a number of circuits at the same time and will cut the power to all of them if leakage (a fault) is detected.

The RCBO is both a RCD and a circuit breaker in one package and will cut the power to the individual circuit, not a number of circuits, if leakage (a fault) is detected. The advantage of this is that if a fault develops only the single circuit exhibiting the fault will be turned off. The disadvantage is that generally the cost of one RCCB protecting a group of MCBs is lower than having a single RCBO on each circuit. However, as RCBO costs have come down over time they are becoming more popular. Additionally, in commercial installations the cost for example of a fault on a lighting circuit causing the ring main powering all the computers to turn off may mean RCBOs are a worthwhile investment.

Both solutions will keep your electrical wiring safe.


What does MCB stand for?

A Miniature Circuit Breaker (MCB) is an electro-mechanical device which automatically switches off the electrical circuit flow should a fault occur, through short circuit or overload of the circuit.

The MCB, an automatically operated electrical switch, is designed to protect a low voltage electrical circuit from damage due to a fault.

A MCB is the preferred device for domestic household circuits and is now used instead of a fuse. It is quick and easy to operate, safe to handle, no maintenance cost and can be easily reset and power restored by the flick of a switch.

By cutting the circuit quickly in a household it can prevent electrical or fire hazards.


How does a Miniature Circuit Breaker (MCB) work?

The MCB switch will kick in and automatically switch off the power supply when the circuit is overloaded, if too many devices are being operated at the same time or if there is a short circuit.

The MCB is designed to track changes in temperature in its operating environment and this will affect the breaker’s current capacity. This is desirable as the cables being protected also perform differently in different ambient temperatures. 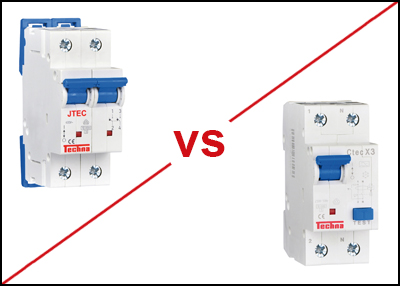 A Miniature Circuit Breaker (MCB) will automatically switch off the power supply if the electrical circuit is overloaded and will also provide short circuit protection.

The Residual Current Circuit Breaker kicks in when the difference between the live and neutral current (called residual current) becomes more than the specified value.


What is an MCCB?

Shortened to MCCB meaning Moulded Case Circuit Breaker it’s another type of electrical protection device. MCCBs are used to protect circuits with higher nominal current ratings than are possible with an MCB. Standard MCBs are rated for nominal currents up to 63A and larger MCBs can also cover 80A, 100A and 125A. Above this the solution is to use an MCCB.

It can be used for higher current ratings (250A, 400A …. 1600A) and fault protection in business and industrial applications, such as providing protection for motors, main electricity feeder distribution and capacitor banks.

Not surprisingly the MCCB is physically much larger than a miniature circuit breaker and is usually designed to protect three phase systems either with or without neutral.

The MCCB may also be found protecting circuits with lower nominal current ratings (eg. 40A to 125A) if the prospective short circuit fault current (the worst theoretical fault current level that could occur) is anticipated to be very high.

What’s the cost of not using a specialist with experience and a solid reputation?

Request a Call Back